MANILA – Marking the World Press Freedom day, families of the victims of the 2009 Ampatuan massacre issued an open letter reminding President Benigno Aquino III of his promise to deliver justice. 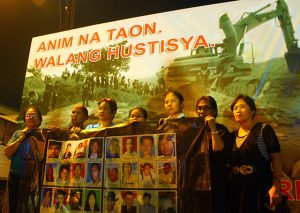 a lamang po kayo sa panunungkulan, tanong po namin: MAY AASAHAN PA BA KAMING HUSTISYA SA KASALUKUYANG ADMINISTRASYON? Kayo ay nangako sa amin at sa araw na ito kami ay naniningil sa pangakong iyon,” (Your term is about to end in a few weeks, we ask you: Can we still expect justice from your administration? You made a promise to us and today we are holding you accountable to your promise) the letter read.

After winning the 2010 elections, Aquino boldly pledged that there would be convictions on the case before he steps down from the presidency.

Contrary to Aquino’s promise, no one has been convicted yet for the brutal murder of 58 individuals, of whom 32 were journalists, on Nov. 23, 2009. In fact, 75 of the more than a hundred suspects remain at large. Of the detained, 45 have been granted bail, including one primary suspect, Andal Sr.’s son Sajid Islam. He was able to post the P11.6 million ($246,000) bail and is now running for mayor of Shariff Aguak, Ampatuan.

“Lumaban po kami sa abot ng aming makakaya… Kahit kelan ay hindi kami naging kampante sa itinakbo ng kaso dahil alam namin kung paano gumalaw at kung gaano kalawak ang kapangyarihan ng kalaban,”(We fought as hard as we could…We have never been complacent with the case because we know how the enemy works and how broad is its power) the relatives said, referring to the Ampatuan clan whose members are primary suspects in the massacre.

The relatives further lamented that the Department of Justice (DOJ) failed to provide them updates on the case, contrary to the agency’s promise.

The relatives said they do not want to lose hope that they would still attain justice. “Sana po ay inyong maalala at maisakatuparan ang inyong pangako dahil hindi namin alam kung may aasahan pa kaming HUSTISYA sa susunod na administrasyon kung sino man ang uupo,” (We hope that you would remember and fulfill your promise because we do not know if we can expect justice from the next administration) they told Aquino. (bulatlat.com)

Election Watchdog Urges Voters To Be Vigilant Of Election Fraud

A Primer For Philippine Politics

A country at war