Bringing Hope to the Hopeless 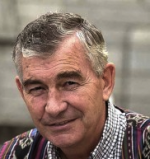 DUBLIN, Ireland – There is now showing in Ireland a new film with the title Black ‘47. It is a story set in the year 1847 when Ireland was under British occupation and a devastating famine hit the poor of Ireland when their staple food, the potato, was attacked by a fungus and rotted in the ground. Approximately one million Irish people died of starvation and another million migrated to America and helped to build that country.

The film is the story of an Irishman who deserted the British Army after fighting in Afghanistan and returned to Ireland to find most of his family died due to evictions by British landlords and death by starvation and the freezing cold. He tries to save his relatives from more evictions but he is arrested and jailed. He escapes and seeks justice and revenge on the oppressors and those that starved the people while they exported tons of food and grain to England. The Irish people totally impoverished and forced into unpaid labour as slaves on the lands and estates stolen from them lived in constant hunger.

That film shows a world of the past much like what we see today in the poor of Yemen, the victims of ethnic cleansing of the Rohingya in Myanmar, the refugees from Eritrea and Syria and the Lumads of Mindanao where justice, peace, and compassion, freedom, and dignity have been stolen and denied. These are the ideals and values that we take so much for granted and without which we could not live. We seldom stop to consider how we could endure the deprivations that the oppressed and the hungry and starving people suffer daily as you read these words

Yet millions suffer calamities and oppression that we cannot imagine. The depiction of the cruelty and suffering of the Irish during the ‘Great Hunger’ helps us understand what millions suffer today.

These values of concern and compassion, the love of justice and freedom for the hungry, the abandoned, the unjustly imprisoned, the disabled and abused are the ideals that give purpose and meaning to human existence. If we don’t practice them, we don’t have them.

Exclusion and exploitation, slavery of any kind by any means is a deprivation of what makes us truly human: thoughtful free choice. When we are deprived of this unique attribute that sets us apart from all other living creatures and it is taken from us, our human dignity is diminished, our rights are denied and we are being treated as less than human.

That’s why the captivity and abuse inflicted by human traffickers are devastating to human beings. Thousands of children and young people are enslaved today. Their self-esteem is taken from them and their will to live is weakened. Many turns to suicide. It is the enslavement of poverty, of hunger, of forced labour and barely surviving without the freedom to choose, to exercise free will, to decide for oneself how and where to live that brings misery and terrible human suffering. That suffering can be ended for thousands if the people of good will act to help them.

Jessa and Jade are sisters 12 and 14 years old abandoned by their parents and left with uncaring distant relatives. The trafficker lured them with food, sweets and pocket money. They had to “play” with a foreigner in his apartment. He was a long staying sex tourist in Angeles city and elsewhere and he allegedly sexually abused the children.

A concerned neighbour of the children heard about it and immediately reported it to Preda Foundation social workers. They rescued the children and brought them to a safe and protected Preda home for sexually abused girls. They recovered and are now safe and happy and became outspoken about what happened to them. They freely choose to file a complaint against their abuser who now has to answer in the court. If only we all were to have such concern to save and protect children, it would be a happier better world.

Hundreds of thousands of young women, many Filipinos, are enslaved in commercial sexual exploitation and are trapped by the chains of debt, paralyzing fear and threats of being abused and raped. Slavery today is when young girls are made to work without pay or freedom, many in the sex industry, which is approved by the Philippine authorities.

In Europe and North America, they are found in many kinds of work- hairdressers, nail salons, massage parlours, and brothels, for example. They live in fear and threats that the traffickers will hurt their families if they don’t obey and work.

The trafficking of persons into slavery is generally ignored or dealt with lightly in many countries. New laws in Ireland and the UK demands that the authorities treat them as needy victims and provide legal help. Much more needs to be done to free thousands more.

As many as twenty million people are trafficked into forced, unpaid labour on any given day and they suffer from it for many years. Some escape, some die, and others set free by rescuers. The greed for riches produced by enslaving our fellow humans, exploiting them without hope of free choice and freedom is life destroying.

Depressing as this is, it is good to know that there are thousands of good people, volunteers around the world, agencies, and NGOs and good police investigators working to rescue the children and youth from the traffickers and bring them to justice.

Preda Foundation has won 13 convictions against child abusers and traffickers in 2018 alone. Many children are saved and restored to a healthy, meaningful life with education and therapy. They then file court cases against the traffickers and abusers.

But there are many more waiting for us to save them to get involved and do what you can. Share this article, volunteer or donate www.preda.org

Read more and get the book Ricky and Julie at Amazon. Click here http://amzn.com/B07DXKX4SV All proceeds go to help the children.

“The press will only be relevant for as...