CHICAGO (JGL) – Dr. Gina Alagon Jamoralin, the new Consul General of the Midwest, wants to reach out to Filipino American millennials, who are the future leaders of the community.

Consul Ericka Anna T. Abad introduced her to the Filipino community on Feb. 22, during a meet-and-greet session at the Kalayaan Hall of the Consulate General Chicago. A holder of Ph.D. in Economics from the University of Sto. Tomas, Jamoralin replaced Consul General Generoso D. G. Calonge, who ended his extended tour of duty last January.

Around 20 community organizations, businesses and local media were on hand to listen to Jamoralin’s remarks. She said she will focus on the two-and-a-half years of her upcoming tour of duty to a “greater engagement with the younger generation of Filipino Americans and the business community.”

At the open forum, members of the community also expressed their warm welcome as they introduced their own respective organizations and advocacies.

Although she came from the “eternal summer” of Honolulu, Hawaii, where she served as Consul General for the last three and a half years, Consul General Jamoralin is “excited to be here in the snowstorm city of Chicago, which is one of the more vibrant cities in the United States.”

“I want to develop a friendship with fellow Filipinos, who are friendly, hospitable and warm and are no different from other Filipinos,” she said.

“Our next generation has deep roots (in the United States) and may not be conversant with the Filipino language. But at least, they have been to the Philippines once and are no longer stranger to the Philippines,” the career diplomat said. “The cultural impact to young Filipino Americans is to learn the language and this can be done thru cultural projects.”

Her late father, Ruben Jamoralin, is from Sorsogon City, a fellow Sorsogueno of this reporter, while her mother, Elisea Alagon, is from Bohol province. She was born in Manila.

Jamoralin wants to adopt the template of honoring the Sacada (pioneering Filipino sugar planters who came to Hawaii after the turn of 20th Century) which she advocates. She encouraged Filipino high school students in the Midwest to form their own Filipino clubs, widen their circles of friends and make their clubs more institutionalized thru film showing, traveling to the Philippines or thru cultural immersions, familiarizing them with Filipino language, dance, arts and other Filipino cultural activities. 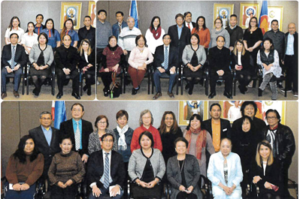 Jamoralin is also considering to continue the monthly Pagkikita sa Konsulado (town hall meeting in the Consulate) promoted by her predecessor. “If there are pressing issues facing the community that need to be addressed and will promote “Filipino unity and common purpose, you can hold it here (in the Consulate).”

Consul General Jamoralin said that during her tour of duty in Hawaii, she proposed to Hawaii local and state officials that Hawaii honors the surviving sacada workers with a Sacada Day. As a result, Dec. 20 has been declared as the Sacada Day, which is now being celebrated in the last three years.

Sakada is a Spanish word, which refers to laborers who are imported from an external geographic area and are paid lower wages than local workers. There were more than “125,000 Filipino sakada plantation labor migrants who came to work on sugar and pineapple plantations between 1906 and 1946 to fill the employment gap in Hawaii in hopes of earning and saving enough money to return to the Philippines, where they could live comfortably off their earnings,” according to Ruben Alcantara’s seminal study (1981), “Sakada: Filipino Adaptation in Hawai’i.”

However, many of them overstayed and called Hawaii their home. Others went to the U.S. Mainland.

The first batch of 15 sacada workers from the Philippines – the first Overseas Filipino Workers – first landed in Hawaii on Dec. 20, 1906.

Consul General Jamoralin said the few remaining sacada survivors were given a certificate of recognition and some of them became very emotional as tears rolled down their eyes during ceremonies.

“If they did not persevere, sow the seeds, found something in common, learned thru language and promote Filipino heritage,” Filipinos would not have been the second racial group in the Aloha State, Jamoralin said.

She added the sacada settlement transformed Hawaii from plantation to modern industry. There are now 209,323 Filipinos in Hawaii or 14.8 percent after the white population’s 353,543 or 25 percent, according to U.S. Census 2016 estimates. She said Ilocano is the dominant Filipino language in Hawaii.

Aside from the updates on the Philippine economy, the new Consul General also reminded Filipinos and dual citizen Filipinos that they have to register until September this year so they can vote in the Philippine mid-term senatorial elections in 2019. She said if they are U.S. citizens, they should also vote in the U.S. elections so they can uplift the social and economic standing of the Filipino community.

Consul General Jamoralin also invited the Filipino community and friends of the community to join the 12th Ambassadors’ Tour in the Philippines from July 9 to 15, 2018 that will visit the top tourist destinations in Manila, Cebu, and Bohol.

Consul Melchor P. Lalunio, Jr. clarified that the “Ambassadors” in the program do not necessarily refer to Philippine government diplomats conducting the program. It refers to the participants of the tour, who can spread around the goodwill generated by their visit to the Philippine destinations. “You are connecting with your roots, discovering places. You are the ambassadors for the Philippines. You present snapshots, experiences, smell, taste, sense of hope that the next generation of young Filipinos who have not just seen and experienced should be invited.”

PHOTO CAPTION:  Mimicking the photo session with the crowded community during the 2015 visit of President Noynoy Aquino, the community and their friends joined the new Consul General Gina Alagon Jamoralin in the photo op along with the officers and staff of the Philippine Consulate who welcome the new ConGen on Thursday, Feb. 22, during a meet-and-greet session.  (Photo courtesy of Mr. Arnel Santiago)

The Pain of Abuse is Always with Us

Through a Different Looking Glass

Expectations in a master-planned community

A conversation with Georgetown University students