In the main event, Geje “Gravity” Eustaquio of Team Lakay Philippines, became the undisputed ONE Flyweight World Champion, subduing Adriano Moraes of Brazil via split decision. Danny “The King” Kingad defeated “The Southern Eagle” Mao Hao Bin of China in an electric performance before a raucous crowd. Both delivered a thrilling exchange of offense.  Two others, Rodian “The Redeemer” Menchavez and Edward “The Ferocious” Kelly, though they gave their best efforts, lost to their respective opponents.

The same opponent on two occasions 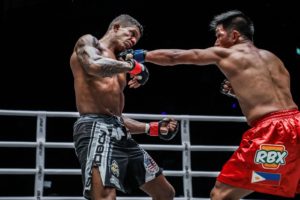 Eustquio throws a punch to Moraes. | ONE Championship Photo

Eustaquio, the 29-year-old Baguio City native, whose goal was to become a world champion, seems to have Lady Luck on his side in every rematch that he has had. Out of 16 bouts in his seven-year prizefighting stint, Eustaquio has shared the stage with the same foe on two occasions, walking out in both instances with his arm raised in triumph.

After dropping a split decision to Anatpong Bunrad in April 2015, Eustaquio settled the score with his arch-nemesis two years later by edging out the Thai hard-hitter with his own split decision victory. He clinched the ONE Interim Flyweight World Championship, toppling Kazakh rival Kairat Akhmetov by way of five-round unanimous decision in a second encounter this past January.

Eustaquio and Moraes stood opposite each other for the first time in September 2014 when the two collided for the inaugural ONE Flyweight World Championship.

Moraes derailed Eustaquio’s championship aspirations as he found a way to counteract his opponent’s striking prowess in the second round and then forced the 5-foot-5 Team Lakay representative to wave the white flag with a guillotine choke.

Eustaquio admitted that it was a tough defeat to digest, but he pointed out that he took a lot away from it by viewing it as a learning curve.

“That loss has taught me a lot. Ever since then, I have worked extensively in improving in all areas,” he said. “I have worked extremely hard to get to this point because deep inside, I knew we would meet again. Now I can finally give him a better fight.”

Since his initial meeting with Moraes almost four years ago, Eustaquio stressed that he has grown tremendously as he has matured and expanded his skill set.

“I have evolved as a martial artist since we first met inside the cage in 2014. I know that it will be different in the rematch against Moraes. The second bout against Kairat Akhmetov is a testament that I am no longer a one-dimensional fighter. I trusted my team, and in the bout against Akhmetov, one of the things we worked on was how to bring the bout back to the feet,” he explained.

Moraes was at ringside when Eustaquio toppled Akhmetov, noticing the evident evolution of Eustaquio from a pure striker to an all-around competitor.

In his cage encounter with Akhmetov, Eustaquio displayed on-point sprawls and his ability to sinuously execute sweeps and guards, as well as his sturdy top control on the mat.

“I’ve seen many of his fights, including his last one in Manila against Kairat Akhmetov. He’s more of a striker, but he has picked up his game remarkably. He is a different fighter now. That makes him so dangerous,” Moraes had said in preparing for their rematch.

Both Eustaquio and Moraes put everything on the line to unify the ONE Flyweight World Championships. Both men went back-and-forth, swapping solid blows and momentum-shifting takedowns from bell to bell. Neither of the two would give each other any quarter for five rounds as both men traded their best offense all throughout the highly-anticipated title unification contest. After a grueling encounter inside the ring, Eustaquio sent the crowd into a rapturous chorus of cheers by clinching a split decision win over Moraes.

“The feeling is awesome. I want to thank all my kababayans (countrymen) here who came out to support me. I came to Macau with one vision, and that is to [unify the flyweight titles], and I know I am not capable of doing this alone. I want to thank God, Team Lakay, and of course my family. And to all the fans, thank you so much for the undying support. Ladies and gentlemen, when I started 14 years ago, this was impossible. But now, after 14 years, impossible is not a word, it’s just a reason. Anybody can be a world champion, as long as you have the drive and the attitude. I am proud to be the undisputed ONE Flyweight World Champion this time.” 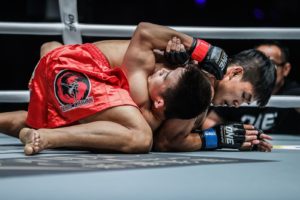 Kingad wins, may face Eustaquio next

Kingad, the 22-year-old Baguio City native finds himself now in a peculiar position with him winning over Ma. He is not fond of the idea of squaring off with Eustaquio for the flyweight crown, pointing out that he would not trade his treasured friendship with his Team Lakay comrade for a shot at the world title.

He stressed that he will gladly play gatekeeper to Eustaquio.

“I don’t mind filling that role if ever he wins against Adriano Moraes. He is my senior, and we are teammates. He is like a brother to me,” he stated. “I am still young. I believe that my time will come.”

Following an unsuccessful challenge for the ONE Flyweight World Championship this past November against Moraes, which ended in his first professional defeat, Kingad rebounded with an impressive triumph over a battle-tested veteran in Sotir Kichukov four months later.

In a fierce clash of top ONE featherweights, former ONE Featherweight World Champion Narantungalag “Tungaa” Jadambaa of Mongolia turned in a vintage performance, stopping top divisional contender Edward “The Ferocious” Kelly of the Philippines by technical knockout in the second round. Jadambaa dominated both striking and grappling exchanges, while Kelly tried his best to fend off the former champion’s advances. However, Jadambaa’s pressure was too much to handle for Kelly, who succumbed to a series of ground strikes from the back.

On the other hand, former ONE Featherweight Beijing Tournament 2014 Champion, “The Underdog” Li Kai Wen of China walked out to a thunderous chorus of cheers as he took on Rodian “The Redeemer” Menchavez. Featuring his trademark aggression and explosive power, Li blasted Menchavez with a monstrous right hand to finish his Filipino foe impressively in the first round via one-punch knockout. The finish set a new ONE Championship record of fastest finish in featherweight history at 10 seconds, shattering the previous record of 21 seconds set by Team Lakay’s Edward Kelly. It also earned Li the GoDaddy KO of the Night honors.

A love story that blooms even during times...