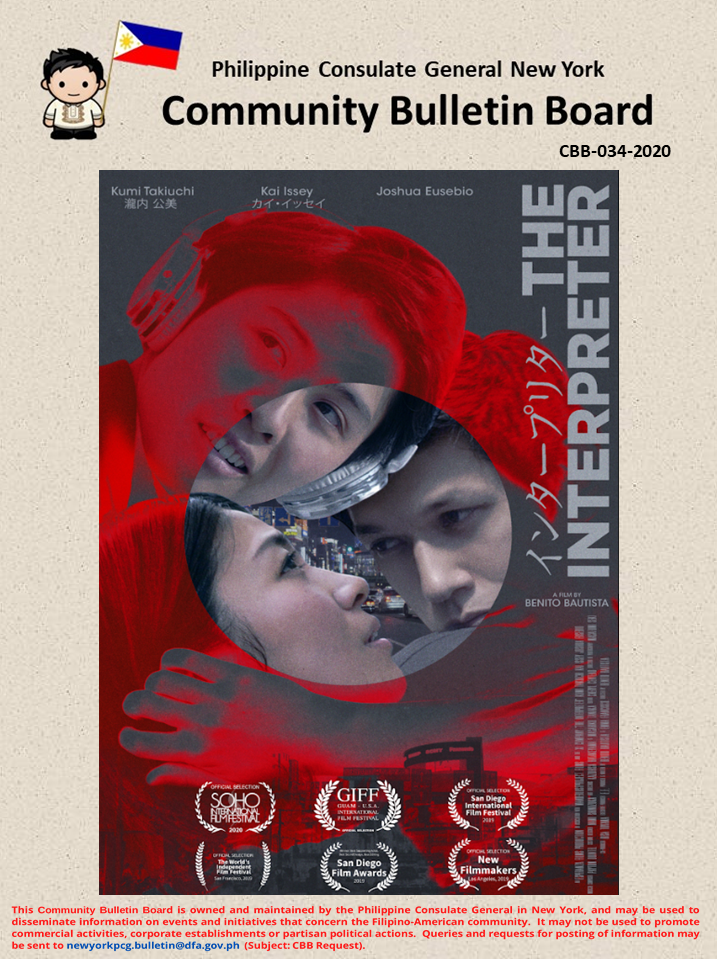 Watch Benito Bautista’s The Interpreter which will be screening at the Virtual Edition of SOHO International Film Festival on 15-22 October 2020.
Below is the link to the screening:
https://sohofilmfest.eventive.org/films/the-interpreter-5f6a5ff5641edb0037022e0f

Below are some reviews about The Interpreter film.
Tyler French’s (writer/director/producer) review:
The Interpreter is a short romantic thriller that lives comfortably at the cross section of art and craft. The vision is whimsical, but grounded. The execution is unique, but clear. I was blown away by this movie.

Within a contemporary setting, each piece of the puzzle falls into place without the use of technology as a crutch. The film feels alive, and very real. The timeless humanity of the characters and their journey is undisrupted by the modern aesthetic.

In watching the Interpreter, we walk through the self-distorted world of three characters’ individual perspectives until the gravity of the events jolt us and the characters into a situation beyond return. It scared me. I needed to be scared by it to learn from it. The director of this film confronts terrifying issues so that we, as an audience, can process our feelings and grow our perspective from the safety of a theater seat.

I spent my evening taking in this film with people that I love, and we must have discussed it over drinks for three or four hours. Everyone was moved by it. I don’t think the audience for this film has an age, or a gender, or a race. This is a film for everyone to see.

Sophie Giberson’s (writer/actress/producer) Review:
The Interpreter is a beautiful and engrossing film that examines the dichotomy of intuition versus desire, and the lenses we wear when trying to connect. An amalgamation of romance, drama, comedy, horror, and multilingual, first date mumble-core that left me feeling both inspired and disturbed (in the best way). I was left examining what we’re able to show to people, and how they’re able to perceive it.

Every moment was articulate and specific, without being in your face about it. The brilliant acting, and unrelenting cinematography created an unshakeable atmosphere; giving you the feeling of both an unbiased observer, and a sometimes unwilling participant in the events. I experienced close to the entire spectrum of human emotion in the 20-something minutes of this film, but it felt effortless due to the masterful storytelling and those who told it.