“The Salary Standardization Law 4 is deceptive and treacherous. It falsely advertises an increase in our wages and yet it will actually rob us of our benefits,” said Robert Mendoza, national president of Alliance of Health Workers. Such benefits are the fruits of long-drawn struggles by health workers worldwide, he said. 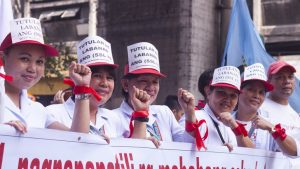 Under the proposed salary hike, government employees said a mere 10 to 27 percent hike will be provided to at least 1.3 million employees. On the other hand, ranking officials, including the president, will get as much as 100 to 228 percent increase.

Ferdinand Gaite, national president of Courage, a nationwide government employees union, told this reporter that the SSL 4, if passed, will also deprive government employees of their hard-earned benefits as mandated in various Magna Carta laws passed in the country. A provision of the SSL 4 states that related laws, including the Magna Carta, are “hereby repealed, amended or modified accordingly,” he added.

Gaite said the proposed SSL has also deprived government offices from identifying who will receive benefits from their respective Magna Carta laws. This discretion will now be given to the Department of Budget and Management (DBM) if the SSL 4 will be passed.

“Historically, we have enough grounds to say that the DBM will work towards removing those benefits,” he added.

During the protest they dubbed as “Black Heart’s Day,” government employees and public health workers threw tomatoes at the life-size cutouts of President Aquino and Budget Secretary Florencio Abad. Others were not satisfied and even mashed tomatoes in the faces of the images of the two officials whom they called “heartless.”

President Aquino has yet to implement a salary increase for government employees under his term.

“The President even blamed lawmakers for stalling the passing of this law. But in his five and a half years as president, he never talked about passing a law to increase our salary. This is like a basketball game, and he wants to pass this law in the last two minutes of the game,” Gaite said during the protest. He added that this could be an election-related move to boost the campaign of the administration’s presidential candidate Mar Roxas, who has been lagging in surveys.

Eleanor Nolasco, co-convenor of the newly-formed Filipino Nurses United, said in the protest that nurses and health workers are in the frontline in providing government services to the people. At the protest, the nurses were once again at the “frontline,” wearing red ribbons in their wrists as they chanted against the proposed salary increase.

She added that would only equate to at least P20 ($.50) increase daily.

“For public health nurses who perform a critical role…how does the increase of P20 per day figure?” Nolasco said. She said in caring for the people’s health, nurses are “exposed to extreme daily health hazards and chronically burdened with low wages.”

Nurses are also overworked as the average nurse-patient ratio in hospitals is 1:60 to 1:100, with extended working shifts of 16 up to 24 hours.

She quipped that the P20 per day increase is not even enough to buy a round trip ticket at the metro rail systems yet alone defray the estimated P1,000 ($21) daily expense of a family of five.

Under the Philippine Nursing Act of 2002, nurses should receive Salary Grade 15, which is equivalent to P25,000 ($526.64). But as in other laws, Nolasco said, this is yet but another “unfulfilled commitment that highlights state neglect of and dishonor for nurses as critical development partners.”

Mendoza said these benefits are supposedly in recognition of health workers who take risks to perform their duties.

“We have to report on duty even during floods and typhoons, cross rivers to get to our patients and regularly go on night duty because people’s lives and health care are in our hands,” he added.

The AHW noted that salaries must be based on actual economic and family living wage and that it should be “reasonable” in order to retain “the best and brightest workers to serve the public.”

But Feny Cosico of Agham told this reporter that it is not only the doctors and nurses who are leaving behind their posts to work abroad due to the unreasonable wages being provided to them by the government. She said that the science and technology sector has also been experiencing “brain drain” with the influx of Filipino scientists applying for work abroad, leaving behind the very low salary and benefits they are receiving in the country.

“The quality of work of many Filipino scientists is recognized abroad. It is ironic that it is not being appreciated in our own country,” Cosico said.

Gaite reminded the government that salaries should be based on social justice. But, he added, the proposed SSL 4 will only widen the disparity of the salary that rank-and-file employees are receiving, compared to officials.

Nolasco said nurses from both public and private hospitals see the SSL 4 as a “ploy to derail us from our call for just wage of P25,000 starting salary for all nurses and a national minimum wage for all workers.”

Rea Alegre, All Workers Unity spokesperson, said “daang matuwid (straight path)” serves as “a downtown to hell for workers and employees, while a highway to riches for high government officials and big corporate executives.”

Alegre said that if ranking officials and corporate executives are made to endure the low and pitiful wages of the rank and file employees, “minimum wages and salaries will be above the living standards in a blink of an eye.”

Kuwaiti court lays down a verdict on OFW’s...