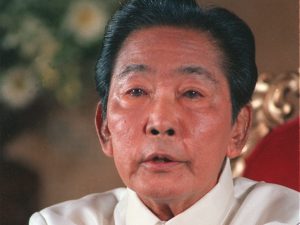 Incoming President Rodrigo Duterte will authorize the burial of the embalmed corpse of dictator Ferdinand Marcos at the Libingan ng mga Bayani, the Inquirer reports.

Quick. Hit the replay button to a report by The New York Times of Jan. 23, 1986. Written by Jeff Gerth and Joel Brinkely, it states the US Army concluded that Marcos’ claims of having led a guerrilla resistance unit during the Japanese Occupation were “fraudulent” and “absurd.”

Repeated investigations, over 35 years, found “no foundation for Marcos’ claims that he led a guerrilla force called ‘Ang Mga Maharlika’ against Japanese forces from 1942 to 1944.”

Earlier, historian Alfred W. McCoy stumbled on documents while researching on World War II in the Philippines at the US National Archives. He was “granted the access normally accorded to scholars… [And] when he came upon the Maharlika files he was allowed to review and copy them along with others.”

McCoy is an American professor of history at the University of New South Wales in Australia. He said he worked with the records by himself until he brought them to the attention of The New York Times.

US National Archives officials did not learn what the documents contained until after they were copied. Richard J. Kessler, a scholar on the Philippines at the Carnegie Endowment in Washington, said: “Marcos’ military record was one of the central factors in his developing a political power base.”

Between 1945 and 1948, various US Army officers rejected Marcos’ two requests for official recognition of a Maharlika force, calling his claims distorted, fraudulent, contradictory and absurd. Army investigators concluded that Maharlika was a fictitious creation and that “no such unit ever existed” as a guerrilla organization during the war.

In addition, the US Veterans’ Administration, helped by the Philippine Army, found in 1950 that some people who claimed membership in Maharlika had actually been committing “atrocities.” The records include no direct evidence linking Marcos to those activities.

Will Marcos be interred at the Libingan ng mga Bayani as “the most decorated war hero”?

Spokespersons of his regime said he won 32 medals for heroism during World War II, including two from the US Army. Two of the medals were supposedly for his activities as a guerrilla leader, but the rest were for exploits before 1942 or after the return of US forces to Luzon in 1945.

The validity of Marcos’ supposed medals has been challenged by Philippine and American journalists, among others. In response, his spokespersons contend that the medals were properly earned and that the records validating them were destroyed in a fire.

When the Philippine newspaper We Forum published an article in 1982 questioning Marcos’ war record, government authorities shut the paper down.

Like thousands of other Filipinos immediately after World War II, Marcos asked the US Army to recognize his unit so he and the other soldiers could receive back pay and benefits. In his petitions, he certified that his unit had engaged in numerous armed clashes with Japanese forces, as well as in sabotage and in intelligence-gathering throughout a vast region of Luzon, and had been the preeminent guerrilla force on the island.

In his submissions, he offered widely varying accounts of Maharlika’s membership, from 300 men at one point to 8,300 at another. In the years since, he had said Maharlika was a force of 8,200 men.

Shortly after the war, the US Army did recognize the claims of 111 men listed on the Maharlika roster. “But their recognition was only for their services with American forces after the invasion of Luzon in January 1945.”

One document says the service that Marcos and 23 other men listed as Maharlika members gave to the First Cavalry Division in the spring of 1945 was “of limited military value.”

It is clear throughout the records that at no time did the US Army recognize that any unit designating itself as Maharlika ever existed as a guerrilla force in the years of the Japanese occupation, 1942 to 1945.

Juan L. Mercado is a columnist for Philippine Daily Inquirer and Cebu Daily News. He writes a Sunday column for Sun-Star Cebu and its syndicated members, Bohol Chronicle and other community papers. He started his career in journalism in early 1950s and served as correspondent for foreign publications including London’s Financial Times and Honolulu-Star Bulletin. Mercado became the Philippine Press Institute’s founding-director. He also edited DEPTHNews, published by the Magsaysay Award-winning Press Foundation of Asia. Following the “People Power Uprising,” and after 19 years of United Nations service, Mercado returned to the Philippines to resume journalism work. He was cited for excellence in opinion writing by Society of Publishers in Asia. In 2005 and 2007, he received the “best columnist award” from the Catholic Archdiocesan Commission for Mass Media.

A love story that blooms even during times...