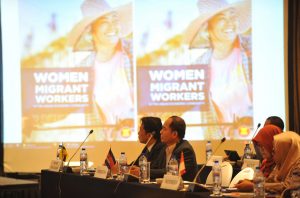 VANCOUVER – Jennifer Morales, a migrant worker from the Philippines works about 40 hours a week cleaning the floors and toilets at a Vancouver area medical facility.
On her off days, she cleans houses.

“Most of the money I make, I send home for my kid’s college education,” she says.

Like her, the tens of thousands of Filipino migrant workers in Canada and around the world send home most of their earnings to create a better life for their children, hoping a college education will push them out of poverty.

For them, the new law in their homeland that will provide free tuition for all students in state universities and colleges in the country is a game changer.
“It will definitely reduce my burden, “said Morales, adding “Maybe I can go home sooner”.

Under the Universal Access to Quality Tertiary Education act, which was signed by President Rodrigo Duterte last week, Filipino college students — including those wishing to take up medicine — could be provided free education in state colleges or universities.

Quality education is difficult to come by in the Philippines for families who have little money to pay for their children’s education.

While deserving students who could pass admission in state colleges and universities are provided with free tuition, they are required to maintain certain grades.
To get free quality education, some apply for admission to the Philippine Military Academy, the Philippine National Police Academy or enter priesthood or apply for scholarship from big companies, which would likely provide them with work upon graduation, or secure really high grades that comes with scholastic honours.

“A college diploma is the most decisive tool a Filipino can carry in the struggle to give his or her family a better life, and President Duterte has just given every Filipino the means to have it,” Senate President Aquilino “Koko” Pimentel said, adding that the free college education law gives more Filipino families better pathways out of poverty.

“I have always believed that education is the great equaliser. I am where I am today because of my education,” said Pimentel, who graduated from the University of the Philippines College of Law in 1990, and topped the Bar exams the same year.

The Senate chief says that the law is a boost for the country and not just for individuals.

Pimentel said: “With this law, our country will have a bigger pool of skilled professionals who are necessary for the development of a modern economy.”
Balanga Bishop Ruperto Santos, head of the Catholic Bishops migrants ministry, said the law granting universal access to college education is a “blessing”, especially to poor families and overseas Filipino workers (OFWs).

Many OFWs go abroad to support their children’s education and other needs of their families he added.

He said Filipino workers abroad endure separation from their families, hardships, and unfair treatments just for the betterment of their loved ones. “This free tertiary education to state colleges and universities is great help to our OFWs,” said the prelate.

“We appreciate the kind gestures of our president,” said Bishop Santos. He also lauded the President for increasing the validity of Philippine passports to 10 years.

“It is very helpful and useful for all, especially for our OFWs as they will save much time and money to renew their passports,” he said.

But while Duterte’s move to sign the free college education law was widely welcomed, some Senators caution that funds should be ensured to make it feasible.
Earlier, Budget Secretary Benjamin Diokno had said that such an undertaking may not be possible since it would provide a great drag on the country’s fiscal flow.

“We laud the President’s decision to sign the law even when there was some hesitation from his economic managers. The challenge now, however, is to ensure that the new law will be effectively and completely implemented in 112 state colleges and universities nationwide,” members of the Senate minority bloc said in a statement.

The minority bloc is largely made up of members of the opposition Liberal Party.

“The new law will only become a reality if government allocates enough and accessible funding for SUCs nationwide. The executive branch and Congress must work closely to make tertiary education accessible to all through tuition subsidies and financial assistance,” they stressed.

The Scourge of HIV, the Internet and Sex Tourism

NYC expands “Key to NYC” program to include...

The Butterfly Effect and Having Faith in Life

“Old-Man River” Plans Can Be Templates for Other...

What Readers Say About the “Old-Man River” Proposals

Hope and Protection for Abused Children