Pacquiao steps in the ring again, July 15 in Kuala Lumpur after a year in hiatus

NEW YORK – Filipino boxing icon Manny “‘Pacman’ Pacquiao will step in the ring again after a year of hiatus since his loss to Australian Jeff Horn in a controversial decision. He will try to be a champion again in his bout with Lucas Matthysse, the reigning World Boxing Association (WBA)  Welterweight Champion.

Two months after the announcement of a Manny Pacquiao/Lucas Matthysse fight and a lingering uncertainty of it moving forward due to money issues, the fight, dubbed Fight of Champions, will happen. It will be held at the 15,000-seat Axiata Arena in Kuala Lumpur. ESPN+, the recently-launched multi-sport, direct-to-consumer subscription streaming service, will stream live the bout exclusively on Saturday, July 14 at 9 p.m. EST, (July 15 in Kuala Lumpur). 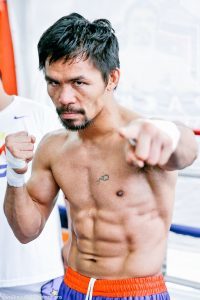 According to a report, Golden Boy Promotions president and Matthysee’s handler, Eric Gomez, had said that the money due in an escrow account to be paid after the fight had finally come through in full last Monday.

“The money is in place. The money was supposed to be in an escrow account in the U.S. and now everything is good. It’s customary practice when you are fighting overseas to have the money in an escrow account, and now the money is there. We’re excited to be working with Manny and his company, MP Promotions, and commend him for putting this fight together and making sure it comes off,” Gomez told ESPN.

He also said that this is Matthysse’s dream fight. “It’s the fight he’s been talking about for five years now. Anytime you can fight a legend like Manny Pacquiao it’s a win.”

Matthysse, 35, (39-4, 36 KOs), of Argentina, will be defending his secondary welterweight world title, which he won on Jan. 27 in Los Angeles with an eighth-round knockout of Tewa Kiram, a less known boxer from Thailand who had a 38-0 record with 28 KOs. This will be Matthysse’s first defense against Pacquiao.

He has won over John Molina in 2014 and Ruslan Provodnikov in 2015 in a 12-round majority decision. At welterweight, Matthysse has yet to win against top sluggers like Errol Spence, Jr., Terrence Crawford, Keith Thurman, Jr. and Shawn Porter. He lost to quality opponents Zab Judah and Devon Alexander (both by split decision in 2011), Danny Garcia (September 2013 by unanimous decision), and Viktor Apostol (10th round stoppage in October 2015). He is ranked at No. 8 in The Ring welterweight list with Pacquiao at No. 6.

For the first time in 17 years, Bob Arum’s Top Rank, Pacquiao’s longtime promoter, will not be providing its services, which is now being organized by MP Promotions, Pacquiao’s own. However, Top Rank will be Pacquiao’s broadcast partner for the event with exclusive TV rights in the US, Canada, and Puerto Rico.

Be thankful for another American freedom – to dream!

Proof of vaccination required to enter the US...