Both Roxas and Enriquez were guest speakers at the second annual Pagpupugay (Tribute), an event honoring anti-martial law activists and human rights defenders sponsored by the New York Committee for Human Rights in the Philippines (NYCHRP). This year’s event was also co-sponsored by SEIU/Local 1199 United Healthworkers East.

Still fighting back tears, Roxas shared her story of abduction at gunpoint followed by six days of torture before surfacing in Quezon City last May 25th, while conducting community surveys in preparation for a volunteer medical mission in a rural town in La Paz, Tarlac.

Roxas, who is based in Los Angeles, is a founding member of the national Filipino-American alliance known as BAYAN USA.

“It is very hard for survivors to speak out in the Philippines because most are still harassed and threatened by the Philippine military and police and threatened with death and harm to themselves and their families,” Roxas explained. “Torture survivors, like myself, also find it very hard because every time I talk about the experience its like re-living it again. But because many more have been silenced and because one the main objectives of torture is to silence and create fear, and to debilitate people, it is important to speak about it.”

Roxas pointed directly to the culpability of the 7th Infantry Division of the Armed Forces of the Philippines in perpetrating the abduction and torture. Last year, the Philippine Supreme Court granted a writ of amparo (protection) to Roxas and validated her claim of abduction and torture, despite attacks from former military generals that Roxas’ ordeal was “stage-managed”. However, the same high court ruling denied the request for an investigation of Fort Magsaysay, the alleged military camp where Roxas was detained. 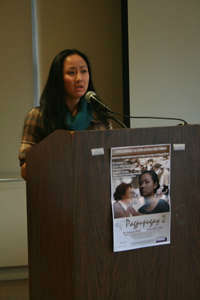 Enriquez, Chairperson of the Philippine national human rights organization Karapatan, presented Karapatan’s most current human rights report which identifies the Arroyo government’s national counter-insurgency program, Oplan Bantay Laya (OBL), as the framework for a “reign of terror” in the Philippines.

“Oplan Bantay Laya is by far the bloodiest and most brutal counter-insurgency campaign unleashed on the Filipino people by any Philippine president,” Enriquez stated.

According to Karapatan, OBL’s objective of annihilating the ongoing armed insurgency in the Philippine countryside is being pursued by targeting legal, aboveground civilians critical of the policies of the Arroyo government. This has resulted in the politically-motivated killings of over 1000 government critics since Arroyo assumed power in 2001.

“The three tiers of opposition to the Philippine government– the armed rebellion in the countryside, the unarmed civil society groups, and the progressive block in the Philippine Congress– are all lumped into one target for Philippine state security forces to go after,” Enriquez explained.

Enriquez also reported that extrajudicial killings in 2009 surpassed the previous annual totals since the Arroyo government assumed power in 2001 due especially to the shocking, “unparalleled” massacre in Ampatuan, Maguindanao which claimed 58 lives last November 23rd.

Funding State Terrorism in the Philippines

Both Roxas and Enriquez addressed the role of US military aid to the Philippines in funding Philippine counter-insurgency operations, such as Oplan Bantay Laya.

“It is disturbing to me that the White House has been quiet about the human rights situation in the Philippines,” Roxas stated. “And Mrs. Clinton’s recent visit to the Philippines did not really address the current human rights violation and instead she expressed her solid support for the Philippine government and the military.”

Both made strong statements for the cutting of further US military aid to the Arroyo government for its ties to the Philippine military’s perpetration of gross human rights violations, as examined in a 2007 US Senate hearing on the Philippines.

“For us who live here in the United States, the issue of torture and our own government’s involvement in torture, whether directly in places like Guantanamo, or indirectly through the funding and training of the military in countries that are guilty of human rights violations, like the Philippines, is a reality we can no longer continue to deny, be ignorant, and choose to be indifferent,” stated Roxas.

While in New York City, NYCHRP arranged for Roxas and Enriquez to meet with several human rights lawyers as well as a courtesy visit to the office of United Nations Special Rapporteur on Extrajudicial Killings Philip Alston, who reported on the Philippine military’s involvement in human rights violations when he visited the country back in 2007.

The local human rights advocacy organization also promoted an international election-monitoring mission to the Philippines this May 2010 known as the People’s International Observers Mission.