“Aquino didn’t snub Filipinos in US—Palace” blared the Sunday September 28 headline of INQUIRER.net report on Pres. Aquino’s response to complaints from Filipinos in the US about his failure to meet with the Filipino community during his five-day visit to the US. The fact that Pres. Aquino’s communications people had to respond so defensively is already a reflection of the cluelessness of Pres. Aquino and his advisers in Malacanang.

To accuse Pres. Aquino of being “clueless” may be too harsh. Certainly, he has not been clueless in dealing with the threat of China where he has admirably stood up to the new Asian imperial power. But when it comes to dealing with overseas Filipinos in general and Filipinos in the US in particular, he has been somewhat of a clueless mess.

For example, in the four State of the Nation Addresses (SONA) he has delivered since his election in May of 2010, Pres. Aquino has failed to include any mention of overseas Filipinos, not even a one line shout out to express thanks to the 12 million overseas hard-working Filipinos for remitting $24 billion a year to help prop up the Philippine economy. 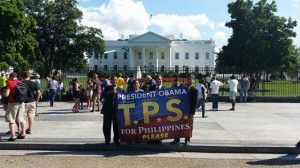 This is especially disappointing for me to admit because the US Pinoys for Good Governance (USPGG.org) was formed in Manila after Pres. Aquino was inaugurated as president on June 30, 2010 when 200 Filipinos from the US, who all campaigned for him, traveled to Manila to personally attend his inauguration. We then convened the First Worldwide Conference of Overseas Filipinos for Good Governance at the Sofitel Hotel on July 1-2, 2010.

In the four years since then, USPGG has supported the good governance initiatives of Pres. Aquino and in leading the global campaign to expose and oppose China’s creeping invasion of the Philippines. In the US, the group has also been active in the Filipino American community’s campaign to request the US Department of Homeland Security (DHS) to grant Temporary Protected Status (TPS) to the Philippines in response to the destruction caused by Super Typhoon Haiyan/Yolanda.

TPS is the most important issue of concern to the community of four million Fil-Ams as it offers the opportunity to temporarily legalize the status of perhaps as many as 500,000 Filipinos who are out of status and living in constant fear of deportation, popularly known as TNTs (takot na takot – very fearful).

More than 200 Filipino community organizations in the US are actively engaged in supporting the grant of TPS to the Philippines – from the National Federation of Filipino American Associations (NaFFAA) to the National Alliance for Filipino Concerns (NAFCON), from the Migrant Heritage Commission (MHC) to the National Domestic Worker Alliance (NDWA) and the Rescue2Recovery coalition. Fil-Am Republicans and Fil-Am Democrats have set aside their political differences to unite on this issue.

After more than 10 months of intensely lobbying the Obama Administration, the Fil-Am community reached the consensus that what was needed to get TPS granted was for Pres. Aquino to make a personal request to Pres. Obama.

Amb. Cuisia is keenly aware of the Fil-Am community’s concern about TPS. On August 15, he hosted a Fil-Am community leaders’ meeting at the Philippine Embassy in Washington DC with top officials of the US Department of Homeland Security (DHS). At that meeting, DHS Assistant Secretary Alan Bersin informed the community that the DHS was in the final stage of deliberating on the issue of TPS for the Philippines.

Why TPS matters even now

Amb. Cuisia relayed our request for a meeting to Pres. Aquino. Regretfully, he informed us, Pres. Aquino’s schedule did not allow for even a half hour meeting with him during his five-day US visit. But Amb. Cuisia said that Department of Foreign Affairs (DFA) Secretary Albert Del Rosario was willing to meet with Fil-Am community leaders in New York to discuss TPS.

Sec. Del Rosario met with Fil-Am community leaders on September 24 in a meeting where he assured the Fil-Am leaders of the full support of the Philippine Government in pushing the TPS request. “We stand with you on this issue,” Secretary Del Rosario said.

What Pres. Aquino did in San Francisco

But we were misinformed. Upon his arrival at the San Francisco International Airport, Pres. Aquino was escorted by a large convoy of San Francisco police cars and motorcycles to the San Francisco offices of Wells Fargo Bank Chairman John Stumpf and other bank officials. He later also met with Gary Loveman, CEO of Caesar’s Entertainment Corporation; and Steven Tight, president of International Development.

In the INQUIRER “snub” report, Aquino’s Communications Secretary Herminio Coloma said, “During the short period of time his plane was in San Francisco, the President met with leaders of two multinational companies on entertainment and banking who expressed interest in investing or expanding their current participation in the robust economy of our country.”

“Short period of time?” Pres. Aquino did not return back to the airport to return to Manila after his meeting with the business leaders. Instead, he directed his police escorts to take him to San Francisco’s fabled Haight-Ashbury district, not to tour the birthplace of the 1960’s Hippie Revolution but to eat burgers at MacDonald’s and to do some shopping for jazz CDs at Amoeba Music across the street. The Haight visit snarled traffic and caused residents to post Instagram photos on Twitter showing the rows of SFPD motorcycles and cars parked along Haight mocking Aquino’s message of climate change.

Why couldn’t Pres. Aquino have stopped to eat at a Filipino restaurant to show support for local Fil-Am owned businesses? How can he ask Fil-Ams to support the Philippines when he can’t even patronize Fil-Am businesses in the US?

From the Haight, Pres. Aquino then proceeded to the Peninsula Gun Store in San Bruno where he even had a photo taken with Jeff Downs, a gun store employee who posted a photo of Aquino and him on his Facebook page with the caption: “The president of the Philippines decided to stop by and buy some stuff. Really nice man!”

TPS_DHS_bannerDowns said that Aquino was “interested in the EO tech optics for rifles. I guess it’s really hard to get them in the Philippines so he was able to get them here. Some of his members of his entourage were able to pick up some stuff too… He spent a decent amount of money but I don’t think it will be appropriate for me to say,” Downs said.

President Aquino stops by gun store before flight back to PH

Guns are an especially sensitive issue in America where gun massacres — like the Sandy Hook Elementary School Massacre in Connecticut in November of 2012 where 27 children killed — have become commonplace. Aquino’s visit to a gun store may cause people to change the country’s tourist slogan to “More Gun in the Philippines.”

The following day the response of the viewers showed 71% yes and 29% no.

Pres. Aquino measured the success of his Europe trip by the $2.3 billion in investment pledges he said he received from businesses there. He would have received much more than that if he had supported TPS. We wanted the opportunity to explain the economics of TPS to him.

We would have told him that in the US, all employers are required to submit an I-9 form to the DHS attesting to the employment eligibility of their employees. Employers hiring “illegals” are fined $2,000 per employee and can be jailed after two or more offenses. This law makes it difficult for Filipinos TNTs to find good-paying jobs as they are often at the mercy of employers who pay them low wages. If they complain, they could be deported. Despite working low wages and living in poor housing, the TNTs still manage to remit about $200 a month to their relatives in the Philippines.

If TPS is granted to the Philippines, then every TNT can be given temporary legal status, which means that employers can legally hire them and pay them the minimum wage ($9/hour in California, $10.50/hour in San Francisco). This means that TNTs can now remit at least $500 a month to the Philippines. If there are 300,000 Filipino TNTs, as the DHS believes, then that means that $150 million would be remitted to the Philippines every month or $2 billion per year. In two years, that would be twice the amount Aquino received in pledges from the European businesses who expressed interest in investing in the Philippines.

If TPS is not granted to the Philippines, then the Fil-Am community may blame Pres. Aquino for not caring enough about Filipino TNTs to make a personal phone call to Pres. Obama. He was too busy checking out the latest gun optics for rifles to bother.

What could have been

Pres. Aquino should read about the “rapturous welcome” accorded to India Prime Minister Narendra Modi at the Madison Square Garden in New York while he was there to attend the United Nations Climate Change Summit.

Modi spoke before an audience of more than 18,000 Indians who chanted “Modi, Modi, Modi” as he told them of his plans to simplify the immigration bureaucracy for Indians living abroad, and as he called on them to “join hands to serve our mother India.”

More than 30,000 Indians out of a US Indian population of 2.3 million had applied for the 18,000 free tickets to cheer their prime minister. If Pres. Aquino had announced his enthusiastic support for TPS and reported on his personal call to Obama, the 20,000- seat capacity Staples Center in Los Angeles would have been filled to the rafters with Filipinos chanting “PNoy! PNoy! PNoy!”

There are likely more than 500,000 TNTs in the US and they alone would have filled the seats but Staples Center would also have been filled with thousands of Filipinos applauding his assertion of national sovereignty in the West Philippine Sea and his filing an action against China in the International Tribunal on the Law of the Seas (ITLOS).

But unlike Aquino, Modi and his predecessors greatly value the contribution of Indians abroad. India has a cabinet-level Ministry of Indians Abroad (moia.gov.in) which proclaims in its website that “in this increasingly inter-dependent and inter-connected world, Overseas Indians are becoming ‘Global Citizens’. Even so, our shared culture and shared values bond all of us together.”

Pres. Aquino has a “myopic view” of overseas Filipinos. To get a clue about what this means, he should read the MOIA website:

“The emergence of significant Diasporas has in recent years brought into sharp focus two key facts. First, there is a large expatriate population of skilled people from emerging economies in the developed world. Second, overseas communities can constitute a significant resource for the development of the countries of origin. The movement of the high skilled and low skilled workers from less to more developed economies and back opens several new opportunities for development. To view the Diaspora only through the looking glass of remittances and financial flows is to take a myopic view. Not all expatriates need to be investors and their development impact measured only in terms of financial contributions to the home country.

“An overseas community can and does serve as an important ‘bridge’ to access knowledge, expertise, resources and markets for the development of the country of origin. The success of this bridge is often predicated upon two conditions: the ability of the Diaspora to develop and project a coherent, intrinsically motivated and progressive identity and the capacity of the home country to establish conditions and institutions for sustainable, symbiotic and mutually rewarding engagement. Home countries are now beginning to recognize the need to pursue and promote the dynamic of the Diaspora and development.”

If he’s not too busy playing with his imported EO optics for his rifle and listening to his jazz records, perhaps Pres. Aquino may have the time to read this article to get a clue about why Filipinos in the US are so disappointed in him.

(Ed. note:  This column, which appeared in the Inquirer,net, is re-posted with the author’s permission.)