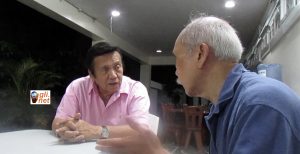 NAGA CITY, Philippines (JGL) – Filipino dual citizens may be able to vote in Philippine elections but they certainly cannot donate to politicians running for office in the Philippines, former Governor and Congressman Luis Robredo Villafuerte said. He told the Journal GlobaLinks that he has the goods to disqualify Rep. Maria Leonor “Leni” Robredo, even if she were to win the vice presidential elections on May 9, 2016.

His wife, Nelly Favis-Villafuerte, lost to Robredo in the 2013 mid-term elections for the third congressional seat, a position which the former governor is planning to reclaim this coming elections.

Villafuerte, a lawyer, alleged that among the offenses which Robredo committed under Sec. 96 in relation to Sec. 264 of the Omnibus Election Code (OEC) was accepting contributions to her campaign in 2013 from:

Villafuerte said “the law expressly prohibits soliciting or receiving from any ‘foreign national or foreign entity.’ And the word “any” includes dual citizens, “since the latter has a foreign nationality component that is covered by the prohibition.”

The names of foreign nationals and foreign entities that were used as evidence by Villafuerte against Robredo were based on Robredo’s own website, http://lenirobredo.ph. It listed donors on four categories of prohibited foreign sources.

ROBREDO IN DEFAULT FOR FILING COUNTER AFFIDAVIT AFTER 41 DAYS

Robredo failed to submit her counter affidavit on time despite prior warning by the Comelec that her failure to reply shall be considered a waiver of her right to respond which is subject to immediate resolution of the case. She submitted her affidavit on Sept. 16, 2013, 41 days after the deadline. Nevertheless, the Comelec Provincial Election Supervisor (PES), Noriel P. Badiola, accepted Robredo’s affidavit and declared her in default.

Badiola’s action caused Villafuerte to file a complaint saying the PES did not allow Mrs. Villafuerte to submit objections to Robredo’s affidavit and without prior notice and hearing “in violation of the due process clause.” The PES “elevated the issue, including the hearing of the case to Romeo B. Fortes, Region V Election Director. Villafuerte accused Badiola of “arbitrary, capricious and whimsical reversal of his own order of Aug. 27, 2013 declaring Robredo in default.”

In her counter-affidavit, Robredo said “she accepted donations coming from Filipino citizens.” She cited the affidavit of Filipino American Loida Nicolas Lewis, a dual citizen. In her affidavit, Lewis admitted she solicited and received funds from abroad specifically in the United States and that she turned over to Robredo what she collected.

“The money, which I turned over to Leni Robredo, was from my personal funds and funds collected from Filipinos living in the United States,” Lewis said.

Villafuerte said “campaign contributions from Loida Lewis, a dual citizen,” accepted by Robredo, “is covered by the prohibition.”

With Robredo claiming she collected funds “from Filipinos living in the United States,” Villafuerte said the burden of proving such claim rests upon Robredo. Based on Ancestry.com. U.S. Public Records Index’s validation and confirmation, Villafuerte said some donors to the Robredo campaign “are natural-born American citizens, namely:

According to Villafuerte, the others, whom Robredo “has not specifically denied under oath that the following namely, among others in the donor’s list, are naturalized American citizens and therefore foreign nationals:”

Villafuerte alleged that Robredo’s principal solicitor and collector of campaign funds from abroad, Lewis, “who admitted under oath that she solicited and accepted donations as campaign funds for respondent from persons, who, like Loida Lewis, are “dual citizens,” it is “undeniable legal fact that a Filipino as a dual citizen has a foreign nationality component and therefore covered by the prohibition. Respondent has been silent about this issue and in law: silence means consent.”

FOREIGN ENTITIES WHO DONATED TO ROBREDO

As to “foreign entities” alleged in the complaint to have contributed to Robredo’s campaign, they were identified as The Unlimited Agency, Inc., registered as a corporation on March 17, 1994 with registration No. 57729554 in the State of Illinois; The Bikol USA of the Midwest, a corporation in the State of Illinois registered on Feb. 11, 2011 with registration No. 67779959; and FUNDRAZR, an online website used to raise funds from Anonymous Donors abroad for Leni Robredo’s political campaign. FUNDRAZR is a product of a company, Connection Point Systems, a privately owned and funded Canadian company.

The second offense leveled against Robredo is for “receiving of prohibited contributions from foreign sources” without identifying the names of the donors in violation of Sec. 98 in relation to Sec. 262 of the Omnibus Election Code” filed on Sept. 22, 2013.

He said Robredo received contributions, which either she did not report to hide the amounts contributed and/or the identity of the donors who are prohibited from giving political contributions.

Villafuerte also alleged that Robredo, while admitting in her counter-affidavit that there was solicitation and acceptance of donations from Filipino citizens living abroad, she did not report in her sworn statement or provide a schedule of contributions received as submitted to the Comelec, and other contributions that Lewis turned over, in addition to the amount of P500,000.00 allegedly from Lewis, “which itself is a violation.”

Because the two cases had been submitted for resolution to the Comelec Regional Election Director Romeo B. Fortes on May 29, 2014 or about one year and 10 months ago, Villafuerte said Fortes did not indicate “whether or not he made a finding of probable case or merely washed his hands over said cases because of pressure or other unexplained causes.”

While Sec. 265 of Omnibus Election Code says the Commission on Elections “has the exclusive power to conduct preliminary investigation of all election offenses punishable under this Code, and to prosecute the same. The Commission may avail of the assistance of other prosecuting arms of the government…. in the event that the Commission fails to act on any complaint within four months from his filing, the complainant may file the complaint with the office of the fiscal or with the Ministry of Justice for proper investigation and prosecution, if warranted.”

Villafuerte said he is planning to exercise his option by filing a case against Robredo before a fiscal’s office or the Ministry of Justice.

Sec. 264 of the OEC provides “Any person found guilty of any election offense under this code shall be punished with imprisonment of not less than one year but not more than six years and shall not be subject to probation. In addition, the guilty party shall be sentenced to suffer disqualification to hold public office and deprivation of the right of suffrage.”

Have Debates Clarify The Real Issues Confronting The Filipino People?

The Philippines re-elected as a member of the...

FYLPROCon to feature Filipino leaders, influencers during its...