First of a series

NEW YORK -“Give us back those Balangiga Bells, they are ours, they belong to the Philippines. They are part of our national heritage,” said President Rodrigo Duterte in his second State of the Nation Address (SONA) on July 24, 2017.

More than a century later of “battles” for the bells’ return and as if President Duterte’s message would be a clarion call, the bells finally arrived in Philippine soil in the morning of December 11 at the Villamor Air Base in Pasay City where the first turnover ceremony took place.  US Ambassador Sung Kim and Philippine officials led by Defense Secretary Delfin Lorenzana welcomed the arrival of the bells. Also, among those who witnessed the turnover were US Deputy Assistant Secretary of Defense for Southeast Asia Joseph Felter and Philippine Ambassador to the US Jose Manuel Romualdez. The bells will be transported to the town of Balangiga in Eastern Samar on December 15  where President Duterte is expected to be at the turnover of the bells to Balangiga officials.

The US Air Force C130J that flew the bells to the Philippines from Japan with the bells on the foreground. | Photo Elmer G. Cato/DFA

“I had goosebumps the moment the United Air Force C-130 came into view at the Villamor Air Base before noon today. It never occurred to me that I would one day see the bells of Balangiga being returned to us,”  Elmer G. Cato, Acting Assistant Secretary, Office of Public Diplomacy, DFA, wrote in his Facebook page.

“This morning, I was there to witness the homecoming. More than a century after they were taken, the bells are finally back with us.”

The two bells in Wyoming were first shipped to a facility in Philadelphia. A third bell, which was in a military museum in Camp Red Cloud in South Korea, was transported to Japan on board a C-130J Super Hercules from Osan Air Base, in South Korea and flown to Kadena Air Base, Japan, Dec 7.  All the bells were reunited in Japan before they were airlifted to the Philippines.

The process to formally return the bells began when Philippine Ambassador to the US Jose Manuel Romualdez and US Defense Secretary James Mattis met on Nov. 14 at the F.E. Warren Air Base in Wyoming. Officials from both the Philippines and the US were also in attendance.

“Today is a time of solemn remembrance as we pay tribute to all those who gave up their lives during the Filipino-American War. We also honor the shared sacrifice of Filipinos and Americans who fought shoulder to shoulder during the Second World War,” the Department of Foreign Affairs (DFA) said in a statement of Nov. 15. “We are grateful for the efforts of the executive and legislative branches of the United States Government.” 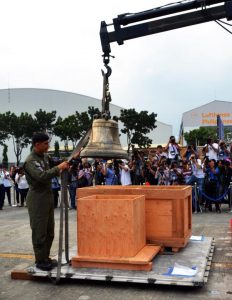 The DFA also extended its gratitude to the US Secretary of Defense James Mattis and US Ambassador to the United Nations Nikki Haley as well as concerned Filipino and American friends led by Hank Hendrickson, Dennis Wright, Henry Howard, Dan McKinnon and others from the US-Philippines Society.

Mattis, on the other hand, said during the brief ceremony on Nov. 14 that returning the three war-trophy church bells to the Philippines will help cement ties between the two countries.

“We return these bells with consideration of our present, but also with [the] utmost respect for our past — one of shared sacrifice as co-equal brothers in arms,” Mattis said.

“The news of the return of the bells is the best I’ve heard in a long time,” Erwin Huelsewede told the Philippine Daily Mirror.  Suede, as he is known to Filipino World War II veterans residing in the US, is a US Air Force retiree and was Special Assistant to the Veterans Administration Secretary Anthony Joseph Principi during President George W. Bush’s term.

“The parishioners of Balangiga and the people of the Philippines must be elated about the ” ‘Bells’ Coming Home,'” Huelsewede said.

Huelswede had worked with R. Sonny Sampayan, a Fil-Am US Air Force veteran; E. Jean Wall, daughter of Balangiga American survivor, Adolph Gamlin; Yolanda Ortega-Stern; founder and president emeritus of the US Federation of Philippine American Chambers of Commerce and current president of the One World Institute and several others during the early stages of the campaign in 1997 for the bells’ repatriation.

Eleanor de Leon, a resident of Woodside, NY, who is from Borongan, Eastern Samar, was excited with the return of the bells to the Parish of Balangiga. She expects that “return of the bells will bring closure to this sad part of the US-Philippine history.” De Leon is the wife of former New York Consul General Mario Lopez-de Leon, Jr.

“I hope that the church will make use of these bells and am excited to hear these bells ringing again,” she said.

Liza Galon of Union, NJ, immediate past president of the Borongan Association of NY, NJ & CT, said she was happy to have learned of the return of the bells “to its rightful owners, the Catholic Church of Balangiga Eastern Samar, after 117 years.”

“As someone who hails from Borongan City, the capital of Eastern Samar, I’m overjoyed that finally, these church bells are being returned. These historic Balangiga Bells must be kept at the Church of Balangiga where they belong.”

Ernie Gange, a community leader from Bensalem, PA, said the return of the bells is a “symbolic gesture on the part of the US.” This is because, he said, in an email interview with the Philippine Daily Mirror, “a hundred of Filipinos were murdered by the US Army… which almost caused the death of [Gen. Jacob H.] Smith, and led ultimately to his court-martial and was found guilty.”

Gen. Smith ordered to “kill everyone over the age of ten” and make Balangiga town “a howling wilderness.” At that time, he was called “Hell Roaring Jack” Smith, “The Monster”, and “Howling Jake” by the media as a result.

“When the clamor for the return of the Balangiga bells has stopped ringing for years, the bells suddenly are on its journey home. For years, the campaign has gone thru furious paces and there were enough heroes to go around,” said Fil-Am historian Nestor Enriquez of Jersey City, NJ, a US Navy veteran.

Campaign for the return of the bells

Perhaps, the “furious paces” which Enriquez mentioned pertain to the years of the campaign which involved several groups after President Fidel V. Ramos first waged a campaign to return the bells. From Washington, DC to key cities in the US, it became a movement for Filipinos to talk about in town hall meetings or assemblies in local churches – even in coffee house talks. Movies were made and books were written — all with one purpose of creating awareness.

Initially, there was a flicker of hope when President Bill Clinton, after talking to President Ramos, made a verbal promise, according to reports, for the return of the bells. But to no avail. It faced more opposition from US lawmakers and veterans’ groups. It became more of a political issue, if not as a matter of history and heritage.

Two visits by Bishop Leonardo Medroso of the Diocese of Borongan to the offices of congressmen in Wyoming did not yield results. He was met only by their staff. Although a global internet signature campaign addressed to the Helsinki Commission, the US Congress and President George W. Bush obtained many signatures, it also did not make headway. However, it resulted in a tepid House Resolution filed in US Congress by California Rep. Bob Filner in 2005.

There are many – past and present –  who can claim credit to the return of the historic bells. But perhaps one influential voice mattered. That of E. Jean Wall, the daughter of Adolph Gamlin. Gamlin survived the revolt of the Balangiga residents on that eventful day of Sept. 28, 1901, where 48 soldiers of the 9th Infantry Regiment, were killed. Initially, Wall opposed the return of the bells but had a change of heart after visiting the town of Balangiga. She became a staunch supporter of the campaign as she promoted healing and reconciliation between the descendants of Balangiga and the American soldiers at Balangiga.

She met with the Wyoming Veterans Commission (WVC) and presented arguments to them for the return of the bells: “1) None of the two bells in Wyoming were rung during the attack on Company C, 9th U.S. Infantry Regiment; the bell that was rung is in the museum of the 2nd U.S Infantry Division stationed in Korea; and 2) there is no connection between Wyoming and Company C, which had their regimental headquarters in New York in the early 1900s. No member of the ill-fated Company C came from Wyoming.”

In her letter to President Bush, Wall wrote that “repatriating the Cheyenne bells is right and proper today” where the “memories of the fallen Americans on September 28, 1901, have been honored, along with all those who died in that tragedy, for decades and will continue to be.” She continued, “By returning the bells to Balangiga and showing by our actions our nation’s capacity for forgiveness and great-hearted magnanimity, we shall be completing [my father’s] mission.”

The Philippine Daily Mirror reached out to Wall, who lives in Arizona, through an intermediary who did not want to be identified in this report, for comments about the bells’ return. Both Wall and the intermediary declined.

Some people credit both US Defense Secretary James Mattis and his counterpart, Philippine Defense Secretary Delfin Lorenzana, for ensuring the repatriation of the iconic Balangiga Bells to the Balangiga Parish Church where the story began and should end.

—–
This report includes material from the Washington Post and Philippine Star.

The Nature of Reality

Celebrating the Rightful Power and Dignity of Women